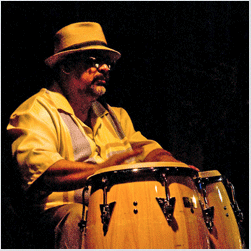 Born in the Bronx in 1952, Roberto began his percussion journey at the early age of 9 while sitting in on jam sessions with the older congeros in Crotona Park. Quickly surpassing his park mentors Roberto began playing professionally with virtually every group from Jersey to the Catskills. Roberto has performed with such greats as Chic Corea, Chucho Valdez, Eddie Palmieri and Andy Gonzales.